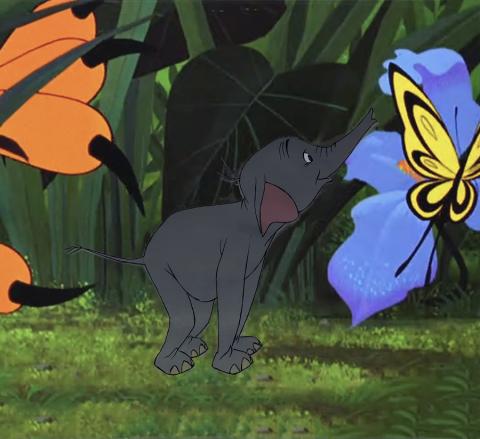 An original production cel from the Walt Disney Studios animated short film Goliath II (1960). Featuring a fantastic full body image of Goliath II as he stands admiring a butterfly, the hand-painted cel was created at the studio and used during the animation process. The cel is an actual frame of animation that was photographed and appears in the cartoon. Measuring 11.75"x13.25" matted, with a mat opening of 8"x9.75" and the character image measuring 6"x8.5", the cel is in very good condition with edge wear and light staining to the mat. The cel was originally prepared by the studio for sale at the Disneyland Art Corner and retains its original mat with the Art Corner gold sticker, whereas it is paired with a recent color copy background that is appropriate for the film.