Winnie the Pooh and a Day for Eeyore and The Sword in the Stone Promotional Poster - ID: jun22216 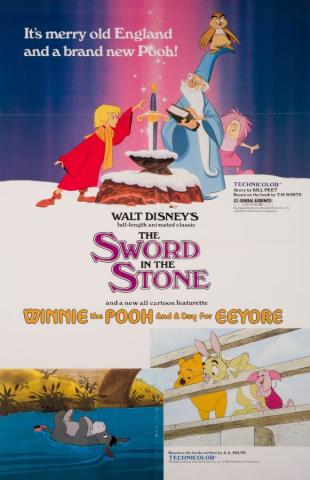 A vintage promotional poster for the Walt Disney Studios animated films Winnie the Pooh and a Day for Eeyore (1983) and The Sword in the Stone (1963). Featuring the iconic scene from the Sword and the Stone with Merlin, Madam Mim, Archimedes and Wart, and the main characters from Winnie the Pooh, the vivid poster was created as advertisement for the theatrical release of the pairing in 1983, when the featurette premiered. Measuring 40.5"x27", the one-sheet promotional poster is in good condition with wear from the distribution folds and light handling wear.