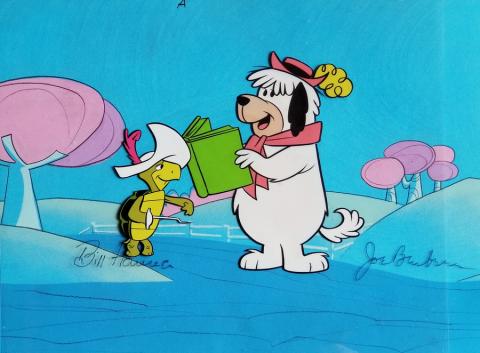 This is an original production cel from the Hanna Barbera Studios production Touche Turtle and Dum Dum (1962-1963). This hand-painted cel features Touche Turtle and Dum Dum, each on a separate layer, and Dum Dum's cel is signed by Bill Hanna and Joe Barbera. It was created at the studio and used during production, representing actual frames of animation that were photographed and appear in the cartoon. The cel is paired with a 10.5" x 14" Hanna Barbera production background that appears to be from Wheelie and the Chopper Bunch. The overall measurements of the cels are 10.5" x12.5" and the character image area measures 6" x 6.25". The setup is in very good condition.