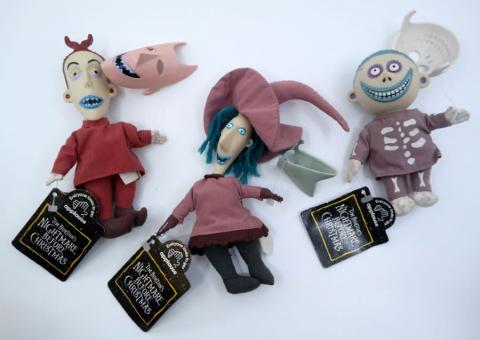 A set of (3) Nightmare Before Christmas dolls inspired by the Disney Studios stop motion animated feature The Nightmare Before Christmas. Featuring accurately detailed depictions of Lock, Shock, and Barrel with removable masks, the dolls were created by Applause Toys. The film's initial release was largely ignored by Disney due to uncertainty with how to market Tim Burton's vision. Items made for the domestic market were usually marketed only with Tim Burton's name and Touchstone pictures, with Disney's name only added to tags after they realized the marketability of the film. Lock measures 3.5"x2" and 6.75" tall, Shock measures 6"x2.25" and 7.5" tall, and Barrel measures 4"x2.5" and 5.5" tall. They are in very good condition with some wear and minor discoloration.